We innovate to create solutions that do not exist yet. We dedicate more than 30% of our team to development. We have the support of research centers and universities, we use the latest digital technologies to provide value in the following areas: 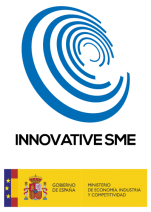 We develop and investigate new products. We study the needs, viability and development of each project with customized solutions. Currently, we have three main lines of new products open.

Integrated colorimetric CO sensor for the next generation of fire alarms in smart-homes.

The GasLok project has been financed within the framework of the R + D Nuclis International Projects of Catalonia-Germany. Its main objective is to investigate and use new technologies for the measurement of gases and vital signs, as well as the location of firefighters acting in an urban environment or forest.

GasLok is a collaborative project led by Sensotran, which also includes the University of Barcelona, the German company Telocate and the Institut für Mikrosystemtechnik of the Albert-Ludwigs-Universität.

The Project lasts two years and began in September 2018.

This project was to update the firmware of the GasVisor gas detection unit to generate alert messages to the CECAT (Center for Operational Coordination of Catalonia) and to create a web tool to facilitate the remote configuration of the control panel.

This porjext has received the grant of the Coupon Program for business competitiveness 2020, which has allowed to innovate the existing control to monitorize the tòxic gases in air through sensors installed in field, and communicate to the CECAT server and transmit the detected alarms.

We bet to anticipate the needs of our clients. The result of our work is always up-to-date security.

Experts in gas detection since 1990